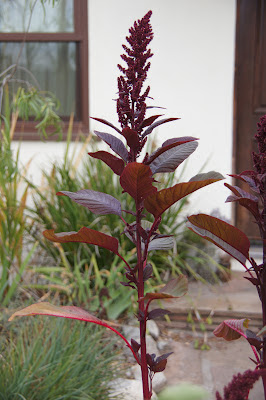 In June, my garden intern and I dug out the grass around the apple trees and built a new bed to brighten up the area below the young trees gracing the walkway to the front door. We dug and sifted and pulled out every millimeter of bermuda grass. Then I watered it all and waited for more bermuda to come up. It did. I pulled it out and repeated the process. Once I was confident all the bermuda was finally gone, I wheeled barrows of compost from the pile out back to the front yard and dug it into the bed. I placed a dreamy order for bearded iris and South African bulbs that will make this bed a show-stopping riot of blossoms, with the earliest maturing plants beginning their first bloom in a year. I figured I'd have to wait for beauty.

The bulbs and iris rhizomes arrived in August, and I planted them right away. However, already something had made itself at home in the bed, something unexpected, something carried in from the compost: amaranth.

Last year, a friend gave me one amaranth seedling from a variety, I think it is Hopi Red Dye—or something very similar—that had naturalized in her yard. I planted it in the rich soil of my vegetable beds, and it grew, but never very dramatically. Out of curiosity last fall, I nibbled some of the seed it gave me—nutty and nice—and I didn't think much about it when I tossed the plant in the compost. I certainly didn't expect the forest I'd find this year. 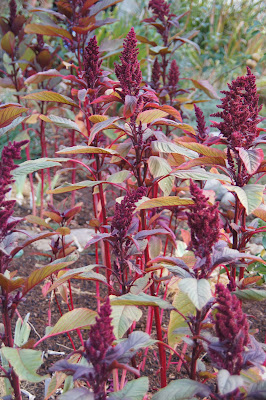 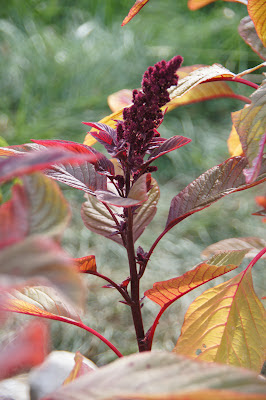 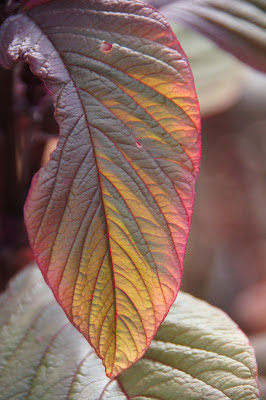 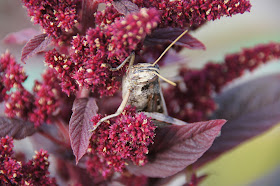 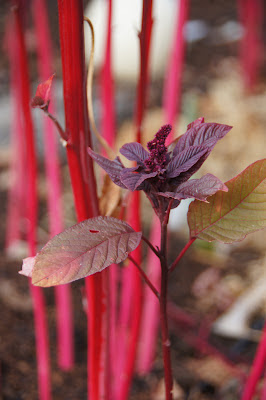 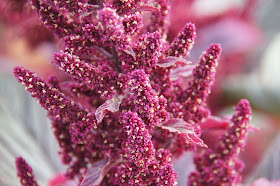 Though I've pulled out armloads of seedlings and eaten them steamed and stirfried, cut others out and filled glass vases with them to make dramatic blood-red feather-hat arrangements with pink-stained water, there are still loads of plants. I'm not complaining. As I wait for the iris to grow in and the apples to continue to grow out, it is nice to have such a dramatic filler.

Yet amaranth is more than a filler. Amaranth is both an edible green and grain, and I'll be able to use it as both this year; I've already eaten plenty of greens, and I'm expecting an ample grain harvest to add to my breads and other baked goods, just as I do the poppy seed I grow. I hope to be able to collect enough to experiment in other ways too, maybe grinding some to try as a flour or popping the grains to use as a cereal. Both the greens and the grains are very high in protein and other good-for-us minerals. And, like so many of our best food-plants, amaranth has a fascinating history.

From "Mexico's Grain of the Gods," by Karen Hursh Graber on Mexconnect.com:


Amaranth, a plant used for both its spinach-like leaves and for the grain gathered from the center stalk, had tremendous ritual significance for the Aztecs. Many of their ceremonies included the formation of an image of one of the gods, made with a paste of amaranth grains mixed with honey. Tlaloc, the rain god, Ome Acatl, the patron of banquets, and Xochipilli, the god of youth, poetry and flowers, were all honored with amaranth likenesses. The images, once formed, were worshipped, broken up and distributed to eat. The birth of a male child was also an occasion involving amaranth grains, this time made into a paste for the formation of a replica shield, bow and arrows, symbolic of hunting in particular and manly pursuits in general.

The leaves, too, had their place in ceremonial meals, ground and used in the tamales offered to the fire god Xiuhtecuhtli, and to the dead on the feast of Huauquiltamalcualitztli, a mouthful to say as well as to eat, meaning "the meal of the amaranth tamales." Amaranth was so necessary to both the religion and nutrition of the Aztecs that it was one of the four grains considered as acceptable tribute from outlying parts of the empire, the other three being corn, beans and chia.

And from: Gardens of New Spain: How Mediterranean Plants and Foods Changed America, William W. Dunmire, 54-55.


By the time Aztecs ruled central Mexico, amaranth seeds were greatly coveted, both for eating and for ceremonial use, and outlying provinces were forced to deliver annual seed tribute to the capital city of Tenochtitlan. Altogether, hundreds of thousands of bushels were funneled to the capital each year. When the Spanish arrived, accompanying friars recognized the importance of amaranth in Aztec pagan rituals and all but succeeded in suppressing the amaranth trade.

But Spaniards had no problem with Aztecs using amaranth grain for daily consumption—fortunate, since the grains are rich in lysine, an essential amino acid lacking in corn. Native Americans also collected [the] greens, which contain other amino acids as well as vitamin A. Eventually Spanish colonists learned the value of adding quelites—the young leaves and stems of amaranth and related goosefoot plants—to their stew pots, and that tradition has continued among more than a few Hispanic farming families living in northern New Mexico today.

So my garden is full of a plant that has nourished people for millennia and it now it nourishes me. I can't get enough of how the sun looks as it streams through the stained glass leaves or how the stems stand fluorescent pink against the dark soil. Neither the Catholic friars nor the heat of late summer have stopped it from providing food and beauty. More appropriately than I could have imagined, the name amaranth comes from Greek: the suffix anthos means flower; the root amarantos means unfading. 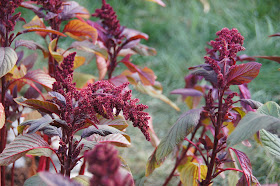